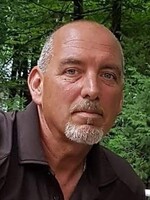 It is with sadness and shock, we announce the sudden passing of David Al at the family cottage at the age of 55, on November 19th of a heart attack.

He will be deeply missed by Angie Al, to whom he was married for 33 years, his daughters Tessa (Kevin Gautreau), Hailey (Adam McClocklin) and his only grandchild, Hayden; mother Margaret Al, brother Jim (Marilyn) and sister Janice Buehlow (Steve); father and mother-in-law Frank & Pauline Ruffolo, sister-in-law Josie Schuett (Greg), brother-in-law Frank Ruffolo (Becky), many nieces and nephews and his dear friend Michele Benninger.

When Dave wasn't working, he could be found touring the countryside on his motorcycle. In Hailey's younger years, you could find her on the back of the bike with her dad, going on short road trips together. Thus began her lifelong love of the outdoors. His trips into the Virginia Blue Ridge Mountains, Las Vegas Valley of Fire and Lake Placid were some of his most cherished times. He also loved to travel to warmer Caribbean climates in the winter. His favourite being Negril, Jamaica.

For many years, Dave played on the Walkerton Hawks then moved to the Rec League. Golf became his sport of choice in the last number of years. He could be found on the course many times a week with his close friends and a great group of men on Thursdays Men's Night.

Dave always had music playing, whether riding or cleaning his motorcycle, puttering in the garage, cutting the lawn, or relaxing on the deck or in the hot tub, there was always music around him. Tessa and Dave shared a special passion for music and concerts and bonded over that love.

Dave was an honorary Dirt Pig and enjoyed volunteering his time and valued the lifelong friendships he had built with the men on the team.

Dave was a co-owner of Leo Al's contracting with his brother Jim, after taking over the business from his father Leo in 2000. His specialty was stone masonry and concrete. His masonry design work always seemed to be the focal point of the home. His unique skill and talent is what kept him in great demand. He was fortunate to spend his office hours in the company of his sister Jan, where they were always laughing and reminiscing on their cherished childhood memories, being only thirteen months apart in age. On the jobsite he was also surrounded by family, as his nephews Matthew, Jamie, Derek, Curtis, and Brett Hawkins worked alongside him.

For those that knew him, they loved him for his witty sense of humour and quick comebacks. He always left people laughing. He was the go-to guy for many of his friends and didn't think twice when someone reached out and asked for help.

The real light of Dave's life was his grandson Hayden. Hayden thought his papa hung the sun, moon and stars for him and if Dave had his way, he would have.

Memorial donations to Heart & Stroke or to the Canadian Mental Health Association (CMHA) would be appreciated by the family. Cards available at Cameron’s. Online donations and condolences may be made at www.cameronfuneralhomes.com