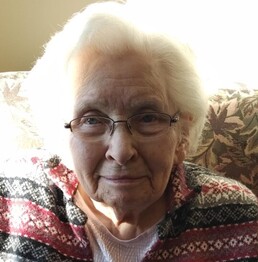 Marguerite Dorothy Fischer (nee Johnstone) of Walkerton, passed away at Brucelea Haven, Walkerton on Friday, July 15, 2022 in her 99th year.

Marguerite’s life began on July 1st 1924 (Dominion Day/Canada Day) during the annual inter-denominational church picnic that was held in the farm’s bush meadow. Marg loved farm life and rode her pony “Patches” to and from the Walkerton Public School each day. Her farm chores included milking by hand 10 cows daily.

As a preteen she contracted polio with her sister Amanda. Being bed ridden for months her father would stand outside their window and sing to them. With great determination she learned to walk again and took up highland dancing to strengthen her legs.

At the age of 13 she started working at Morrison’s Feed Mill by Otter Creek where she eventually met her future husband Leo Fischer who was employed there as a truck driver. War broke out and with her brother serving overseas she had to now deliver milk to the local dairy each day before attending high school. In 1942 Marg took on the role as office manager for Hanover Transport, Walkerton. As well, she trained with the Red Cross and very much wanted to serve overseas but the war ended before she had the opportunity to go. When the transport company was sold to Argosy, she made the weekly Toronto trip for 6 months in order to help with the transition training of new staff.

Leo and Marguerite married in 1948 and in 1952 they purchased her parents (Johnstone) farm south of Walkerton. Over the next 9 years they had 4 children and continued to expand the farming operation. In 1977 they retired and built a new home on the corner of highway 4&9 with son Jim (Donna) purchasing the dairy farm.

Leo passed suddenly in 1979. Marguerite devoted the next 15 years to international travel and volunteering which included the Widows/Widowers support group, palliative care, Brucelea Haven, the Christopher Leadership Course, and the IODE. Travel and giving back to the community were two loves very close to her heart. She married Allan Seip in 1988 but was again widowed in 2014. From her home, she moved to Heritage Senior Community, Maple Court and finally Brucelea Haven LTC.

Throughout her whole life she never moved further than 1 km from where she was born.

Memorial donations to Saugeen Hospice Inc or to the Walkerton Food Bank would be appreciated by the family. Online condolences and donations may be made on Marguerite’s memorial page at www.cameronfuneralhomes.com