To share your memory on the wall of Murray Van Oene, sign in using one of the following options:

Provide comfort for the family by sending flowers or planting a tree in memory of Murray Van Oene.

Provide comfort for the family of Murray Van Oene with a meaningful gesture of sympathy.

After a hard-fought battle and speaking with his family, Murray passed away on the evening of Friday, May 7, 2021 with his wife of over forty years by his side. He had recently turned 67.

Murray is survived by his loving wife Linda (nee... Read More
After a hard-fought battle and speaking with his family, Murray passed away on the evening of Friday, May 7, 2021 with his wife of over forty years by his side. He had recently turned 67.

Predeceased by his parents, Ken and Dorothy of Manitoba, and brothers Lorne (Shirley) and Cliff. Also predeceased by his son-in-law Ray Walter, brother-in-law Dave Neisen, parents-in-law William and Shirley Zettler, and many other family members.

Murray was a hard worker who took pride in his trade. He was a loyal member of the Plumbers, Welders and Steamfitters Local 527 for the past 47 years. He enjoyed hunting, and was a long standing member of the Swinging Bucks Hunt Club, as well as the Legion. In his earlier years, Murray was active in many leagues, including billiards, broomball, and baseball, where he earned the nickname “Slider”. He always loved spending time with family and friends at the cottage, trailer, garage, or around an open fire. Most recently he appreciated video calls with family and friends. He was fond of rock tunes, funny commercials, and always had a joke up his sleeve! He was quick-witted, and proud of his family until the end, holding especially close to his heart the time he spent with his granddaughter. Murray will be missed by many.

A small celebration of life for family and close friends will be held at a later date.

Due to the current restrictions on social gatherings, the family asks that you share a fond memory or condolences for Murray and family on the Cameron’s website at www.cameronfuneralhomes.com. For anyone wishing to make a donation in Murray’s honour, please direct it to the Residential Hospice of Grey Bruce (PLEASE INDICATE IN NOTE TO CHARITY: SOUTH BUILD), to The Raymond Walter Memorial Fund that supports local projects, or as you see fit. 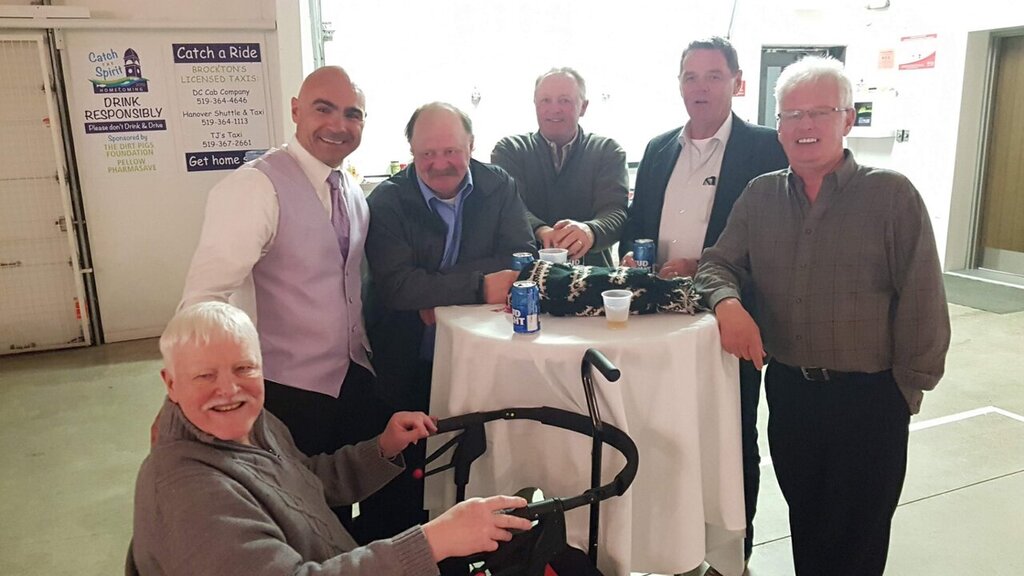 Donations are being accepted for:
Residential Hospice of Grey-Bruce Inc. The Raymond Walter Memorial Fund

We encourage you to share any memorable photos or stories about Murray Van Oene. All tributes placed on and purchased through this memorial website will remain on in perpetuity for generations.

Dear Linda , Holly & Ashley and family.
We are very saddened to hear that Murray has passed away. He was a super nice guy , fun to talk to , and a great pool player as we seen when he played in Ray’s annual pool tourney. He is now having a “cold one” with Raymond and chatting it up. We are thinking of yous all and praying for you at this very difficult time,
With sympathy, Ron, Rosemary, Rachel & Andrew
Comment | Share Posted May 23, 2021 at 02:27pm via Condolence
RS

i worked with Murray at Bruce A on construction and later when he was coming in on App A calls great guy no many moments without a laugh my condolences to Linda and the family he will be missed greatly
Comment | Share Posted May 18, 2021 at 07:58pm via Condolence
DL

Our sincere sympathies to Murray’s family.. I remember Murray from school in Deloraine....keep his memories close to your hearts and it help thru the difficult days ahead.... Darlene(Fraser) and Grant Lesy
Comment | Share Posted May 17, 2021 at 06:27pm via Condolence
KM

Dear Linda and Family, My thoughts are with you at this time. It was a pleasure to have known Murray and I will certainly miss his quick wit:)

Murray was one of the good guys.
Always had a good joke & a laugh to share.
He loved is a family and made our family gatherings and reunions more fun. He will be truly missed by all.
My deepest condolences to Linda & her family.
Dean & Cathy Barclay
Comment | Share Posted May 14, 2021 at 10:01am via Condolence