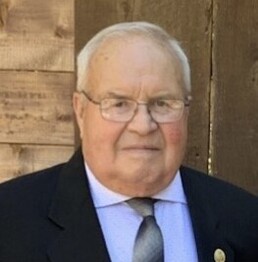 Robert Weishar passed away on July 15th at the age of 86, surrounded by loved ones at Brucelea Haven in Walkerton.

Bob, Dad, Grandpa, Poppa. He didn’t ask for much but was willing to give the world for the people he loved. One too many cups of coffee, an ice cream cone, and watching his grandchildren play their favourite sports fueled his day. He taught everyone around him a thing or two about a good work ethic, something he learned long before he took over the family farm on County Road 12. His family admired him for more than just this. He was devoted to his church, and he put his faith in action by volunteering his time, being a member of the Knights of Columbus and Saint Joseph’s Aid Society and helping take care of the cemetery. He made room in his heart for many, and while his passing leaves his family and friends a little broken, their lives have been filled with his warm smile, his generosity, and an unexpected hour and a half on the phone.

When his wife Margaret (nee Waechter) passed (2001), he was lost without her. Then he found his second love – he called Eileen his angel. Eileen (nee Graf) will miss their daily routine, visiting friends and picking pears together, but she will carry his love for her in her heart and think of him when she tends to their rose bushes.

His children, Brian (Kim), Sandra, Terry (Marg) and Murray (Christine) are grateful for his attentive interest in everything about their lives. Poppa was very proud of his grandchildren Katelyn, Christina (Rob), Robert, Michael, Ryan, Shawn, Adam, Jenna, Connor, Ethan, Maeve and Cameron, and great-grandchildren Braxton, Brynleigh, Avery and Kallie. He also had a special place in his heart for his daughter-in-law, Wanda.

Bob came from a large family, the oldest of ten, and will be remembered by John (Anne), Doreen (Pat), Betty, Frank (Mary Lee), Allan, David (Denise), Carol and Brenda.

Bob was also fond of all the time spent with members of the Walter, Graf, and Waechter families.

On one of his final days with us, Bob still managed to charm some extra ice cream from one of the wonderful staff who took care of him. Bob thought it tasted delicious.

Memorial donations to Saugeen Hospice Inc., Alzheimer Society of Grey Bruce or the Heart & Stroke Foundation would be appreciated by the family. Online condolences and donations may be made on Bob’s memorial page at www.cameronfuneralhomes.com