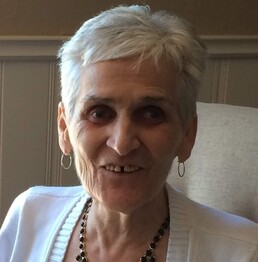 Shirley Elizabeth Grubb, of Walkerton passed away at Brucelea Haven, Walkerton on Tuesday, August 16, 2022 at the age of 81.

Shirley was born June 12, 1941, into a large family of which she was the 4th youngest of 12. Growing up on a farm, she learned hard work and teamwork from a young age. Her devotion to God was also stemmed at an early age …and she worked for many of her younger years as an assistant to numerous priests in the rectories of which she shared many laughs and stories that made way to undeniable friendships for life. Eventually she became a nurse’s assistant, today known as a PSW paving her way to her lifetime job of over 30 years at Brucelea Haven.

Shirley did not have any children of her own, but she became mother and friend to many of her nieces and nephews …especially to Connie, Barb, Brenda and Tom.  And, if she wasn’t playing a maternal role (that she didn’t even know she had) to us and others, she was playing worry wart to the rest. She always knew what was going on in each of her family members lives, as well as their childrens … and she prayed and worried for us constantly.

Before she could fully retire, Shirley lost much of the sight in one eye, and had destructive glaucoma in the other. Even though this devastated her and forced her into a somewhat early retirement, it did not hold her down. She
could no longer drive …but she still lived as independent as a person could possibly do under such debilitated circumstances. She loved to walk and take care of whatever business she could on her own - always looking like
a million bucks and asking for help only when absolutely needed. Her genuine soul was admired by everyone that knew her well and even those who didn’t, along with her sharp sense of humour and her signature smile.

Sadly, Shirley developed dementia during the last 2 years of her life …and it spiraled her quickly. When she could no longer live alone, she stepped stoned to Maple Court and less than a year later she found her final earthly home back at Brucelea. We will be forever grateful to those who assisted her everyday decline in both establishments as neither place was where she wanted to be. We as her family were very fortunate to have both places to help us help her, in her toughest times.

Shirley will be missed by her siblings John (Joan) Grubb, Walter Grubb, Austin Grubb, Lucy Miller, Phyllis Niesen, Doreen "Reenie" Weber, and Francis Grubb, as well as her brother-in-law Norbert Wilhelm, and sister-in-
law Leona Grubb. Especially missed by her nieces and nephews who were her genuine friends and caretakers as well as her closest lifelong friends Karen, Doreen, Sharon and Theresa.

We will all miss her so much! Her love of a Good burger and ice cream, Coffee, clothes shopping for bargains, the shopping channel, car rides, casino stops, calling us air heads, and always sharing a laugh or a chuckle
at something. And - we will never forget her favourite saying - “Life is like a box of chocolates …you just never know what you’re gonna get “ Forrest Gump

Memorial donations to the Sacred Heart Building Fund or to Saugeen Hospice Inc. would be appreciated as expressions of sympathy. Online condolences and donations may be made on Shirley’s memorial page at www.cameronfuneralhomes.com