To share your memory on the wall of George Ruth, sign in using one of the following options:

Print
George Albert Ruth, of Walkerton, passed away at Parkview Manor, Chesley on Thursday, December 24, 2020 at the age of 89.

Dear brother of Ed of Hepworth, Jim (Joan) of Wiarton, Jeanne Phillippi of Walkerton, Mike (Janet) of Wiarton, Mar... Read More
George Albert Ruth, of Walkerton, passed away at Parkview Manor, Chesley on Thursday, December 24, 2020 at the age of 89.

Dear brother of Ed of Hepworth, Jim (Joan) of Wiarton, Jeanne Phillippi of Walkerton, Mike (Janet) of Wiarton, Mary Jo (Murray) Ceaser of Hanover, Peter (Charlotte) of Hepworth, Helen (Vic) McMillan of Hepworth, Norbert (Pat) of Alberta and Frank (Linda) of Wiarton. He will be remembered by many nieces and nephews.

A memorial mass will take place in the spring.

As expressions of sympathy, donations to WES For Youth Online would be appreciated by the family. Cards available at Cameron's (519-881-1273). Donations and condolences may also be made online at www.cameronfuneralhomes.com
Read Less

Receive notifications about information and event scheduling for George

You will receive any future notification messages.
No funeral details available.

We encourage you to share your most beloved memories of George here, so that the family and other loved ones can always see it. You can upload cherished photographs, or share your favorite stories, and can even comment on those shared by others.

Posted Jan 12, 2021 at 09:27pm
Sincere sympathy on the loss of your brother George. You are in our thoughts and prayers. Sincerely, Judy & Jim Sloan
Comment Share
Share via:
DB

Posted Dec 30, 2020 at 06:04pm
I knew George as a kind and generous man and a great lover of animals.
My condolences to his family.
Comment Share
Share via:
BZ

Posted Dec 30, 2020 at 11:24am
We haven’t seen George for years but remember him as a good hearted man
Our sympathy to all the family &friends
Comment Share
Share via: 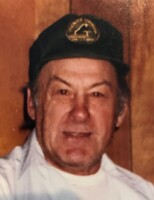